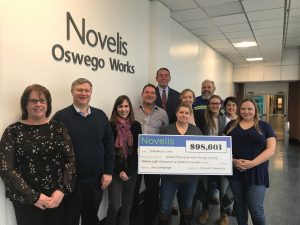 This year’s total gift of $98,601 is an increase of more than $20,000 over last year’s contribution, which Novelis representatives attribute to the dedication and creativity of the company’s United Way campaign coordinator and committee.

Throughout the campaign, employees are encouraged to give back through payroll deductions, participating in fundraisers, and giving time through volunteer opportunities. Novelis then matches 50 percent of the total contributions made to the local United Way, effectively turning each $1 into $1.50.

“We are beyond grateful for the continued support of Novelis, and we are blown away by the increase in this year’s workplace campaign,” said United Way Resource Development Director Lexie Wallace. “We know it took a lot of time and effort for employees to make this growth happen, and we could not be more thankful for their support.”

“Novelis really thought outside of the box this year, and I think their creativity in fundraising helped push their campaign over the top,” said Wallace.

Some of the Novelis fundraisers included raffling SU basketball tickets, bringing food trucks on-site that were willing to donate a percentage of their sales, and the 30 Day Giveaway, which gave participants a chance to win prizes every day through the month of November after purchasing a $30 ticket. Some of the high quality prizes included an Apple Watch, Yeti Cooler, Kitchen Aid Mixer, and much more.

“We’re hoping to use these Novelis events as an example for other groups who are looking to host unique fundraisers,” said Wallace. While she praises the creativity of the special events, Wallace also explains the success of the Novelis campaign would not be possible without a team of supporters bringing awareness to the United Way on-site.

“As a company, Novelis stresses giving back to the community,” she said. “We are lucky to have so many individuals who take that message to heart and give their time and energy to supporting our mission of enhancing lives throughout Oswego County.”

Specifically, Wallace points to Dick Delaney from Novelis who is both an active United Way board member and chairperson of the Campaign Cabinet. Novelis also recognized Delaney’s dedication by awarding the United Way a $1,000 grant in his name, which becomes $1,500 with the Novelis Neighbor Match.

“I was originally inspired to get involved with the United Way of Greater Oswego County because of the value Novelis places on being a community leader,” said Delaney. “Our commitment to continuous improvement in the workplace spills over into ensuring positive improvements in our communities, and I found the mission of the United Way aligned with that desire to enhance the lives of our neighbors.”

Delaney first began representing the United Way at Novelis in 2004 when he took on the role of Co-Campaign Coordinator. It became his responsibility to explain the role of the local United Way and to encourage staff participation in giving to support the organization’s mission. During his first campaign, Delaney was able to grow employee participation in his department by 82 percent.

Since then, Delaney has remained active in promoting the United Way on-site and through the community, and says he is proud of Novelis’ continued commitment to supporting the Annual Campaign.

“I believe we have a leading campaign that is driven by employees and support from management,” said Delaney. “Our campaign team offers people the time and resources to be creative and successful, and I look forward to supporting many future years of giving back through the United Way of Greater Oswego County.”

“We are thrilled by the success of this year’s Novelis campaign and hope to keep this positive momentum going,” said Wallace. “This support is what makes it possible to create positive change throughout our county.”

To learn more about the work done by the United Way of Greater Oswego County, visit https://www.oswegounitedway.org or call the office at 315-593-1900.

Posted in News.
GIVE
ADVOCATE
VOLUNTEER

We strive to stop hunger, help children and youth succeed, and better the health and well-being of our community. Let's work together to meet the needs of Oswego County. United we provide solutions.