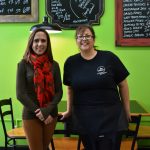 recently took part in a countywide Giving Thanks, Giving Back initiative by donating a percentage of their sales from Nov. 21 to the United Way of Greater Oswego County.

Barado’s on the Water in Central Square, Damiano’s Eatery in Mexico, Gibby’s Irish Pub in Oswego, and Fajita Grill locations in both Fulton and Oswego collectively raised more than $1,100 dollars to support the United Way’s mission of ending hunger, supporting children and youth, and ensuring wellness across Oswego County.

Lexie Wallace, United Way resource development director, said they were thrilled with the level of participation seen during the inaugural year of Giving Thanks, Giving Back.

“This event was a true illustration of what can be accomplished when we live united,” said Wallace. “We are so grateful that these community champions joined us to make a difference in our county.”

According to Wallace, the United Way hopes to make Giving Thanks, Giving Back an annual event that community members can look forward to.

“We hope to see this initiative grow in the coming years,” she said, adding they plan to continue holding the event on the day before Thanksgiving to make it easy for locals to give back at the start of the holiday season.

“The timing of Giving Thanks, Giving Back was intentional,” said Wallace. “We chose the day before Thanksgiving so people who are home visiting family for the holiday have the opportunity to give back to their hometown while supporting local establishments.”

All funds raised by Giving Thanks, Giving Back go toward the United Way’s Annual Campaign. The United Way touches the lives of all ages in all corners of Oswego County by providing funding to 31 programs run by 20 different nonprofit agencies. To learn more about the United Way of Greater Oswego County, visit www.oswegounitedway.org or call 315-593-1900.

Posted in News.
GIVE
ADVOCATE
VOLUNTEER

We strive to stop hunger, help children and youth succeed, and better the health and well-being of our community. Let's work together to meet the needs of Oswego County. United we provide solutions.